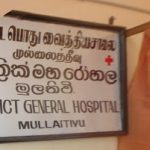 The District General Hospital (DGH), Mullaitivu is the main hospital in the Mullaitivu district. It was reopened on 25 March 2010, with an OPD, a Male ward, a Female ward, a Maternity ward and a Pediatric ward. The Hospital has a bed strength of 60. In June 2012there were 24 doctors including three consultants in Paediatric, Gynaecology and Surgery. People from villages in Janakapura, Weli Oya, Sampath Nuwara, Nedunkerni are coming to the Mullaitivu hospital. With a daily attendance of 500 to 600 patients to the OPD and in-house patients to the full bed capacity which is nearly 200 beds, over 70 babies are born in the hospital monthly.

A medical intensive care unit will also be established in the medical ward complex and all equipment will be provided to the ward complex.